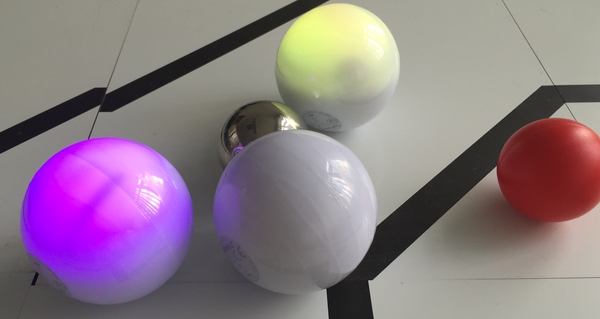 In this Software Project, we will work with a swarm of rolling objects. These objects should be programmed to develope a swarm behavior. More Information about the Rolling Swarm will be announced here.

The first meeting will be used to organize the project. We will describe the available tasks, the used system and group the interested students. This Kickoff-Meeting will be held on October 18th at 13:00 in G29-035.

The course will be taken in groups of 3-4 Students per Topic. The  students and the groups will be chosen by us depending on your background. The individual topics are not fully fixed, extensions and modifications are possible depending on the skills and interest of participating students. This will be discussed in the first meeting. The result of each project is a working demonstration with commented source code and a written documentation indicating the general concept and a Howto to start the demo.

The robots are connected to one or more PCs using Bluetooth. The PCs run the Robot Operating System (ROS). This routes the sensory information and actuation commands between your programs and the lab equipment dynamicaly. The position of the robots is tracked by a camera system and provides as a 2D-position with high accuracy and update rate.

We provide some example tasks that may be altered depending on skills, background and interest of students: