We offer two studies covering findings about a simulation of reliability in organized animats. Animats are simple agents with cognitive abilities similar to organisms, e.g., ants or bees. We simulate the evolution of organized animal swarms navigating between two rooms without colliding against each other. These studies help to advance knowledge about the optimal size of organizations and how the organization's performance depends on the abilities of the individual members.

Simulating agents acting in an organized group is already a common practice. Not only to study swarm behavior but also to solve optimization problems. Still, little is known about how the size of the group, the cognitive abilities of the agent, or uncertain environmental conditions influence behavior. Consequently, depending on the internal and external constraints, the behavior of agents and their ability to cooperate varies. 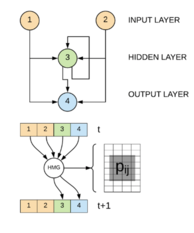 In the simulation experiments, we are wondering about the specific size of the organization in terms of the number of individual members. As a second dimension, we manipulate the individual's potential skills in terms of memory, sensory capacity, or motoric abilities during evolution. After evolving the animats, we expose them with uncertain conditions like changing the group size or changing the static environment. Since the environment has constant space, changing the group size varies the environment's density, and the animats are less or more likely to meet group members. Changing the static environment makes it easier or harder to navigate between the rooms, e.g., by adding or removing walls. We argue that those post-evolutionary tests provide data to assess the reliability of animats under uncertain conditions. The abstract nature of our study can be useful to theorize about the dynamics between the organizational and individual levels. Further, it sheds light on the high complexity of studies investigating multiple levels of analysis.

The simulation of a winner generation, visualizing the wall-following strategy.

The findings are divided into the results for the evolution of the animats and the results of the reliability assessment: First, we find that it is dependent on the group size for animats to evolve flexible behavior, reasonable task fitness, and higher brain complexity. For our experiment design, the group size must be neither too small or too large. Second, we find that there can be a relationship between the group size an animat evolves in and the corresponding reliability. In our design, an animat who evolves in a balanced group size shows the best reliability under uncertain conditions. Further, we can show a correlation between high brain complexity, the group size, and optimized sensor capacity.

The evolutionary simulation experiments using a Genetic Algorithm to generate collective behavior. This method visualizes a way to study reliability in organized groups while being able to control conditions and collect data on multiple levels. In general, the studies show that the group size can have an effect on reliability in uncertain conditions and that rather general cognitive abilities, which relate to heuristics, can avoid over-specialization.

More details about this work can be found in: