This framework uses VREP as simulation backend. It enables a physical simulation of the behavior of multiple copters. We imported our CAD model of the copter to represent it correctly in the virtual world. The simulation engine enables us to integrate virtual counterparts of the sensors of the real FINken. Consequently, we are able to also simulate the sensory behavior and the results on the swarm behavior. The first prototype has only a limited model of the copters parameters. We currently only estimated mass and mass distribution of the copter for the simulation. Currently, a student project is under way to extend this limited model to a more realistic one. The final goal of the simulation framework is to test and evaluate algorithms, which we want to deploy to the real copters, beforehand. Additionally, we may use a realistic simulation to let adaptive algorithms learn parameters, without the need to let the real copters run for hours or even days. 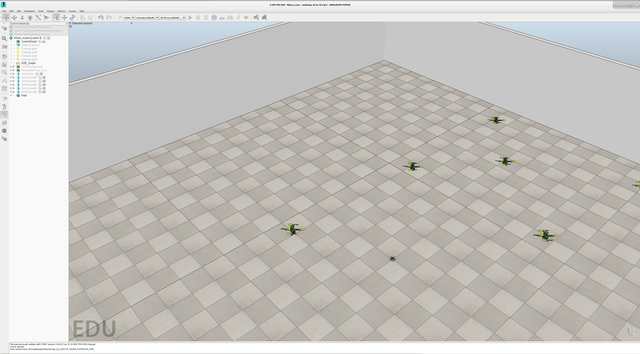 This project aims to create a simulation environment to test swarm algorithms. It will enable us to test our scientific approaches without copters, perform parameter estimation or extend the swarm beyond the amount of physically existing copters. To this end, the VREP Simulator is extended to provide a virtual Finken (II). Additionally a communication infrastructure is established, which enables the synchronization between the real copters flying in the arena and the virtual ones flying in the simulation. 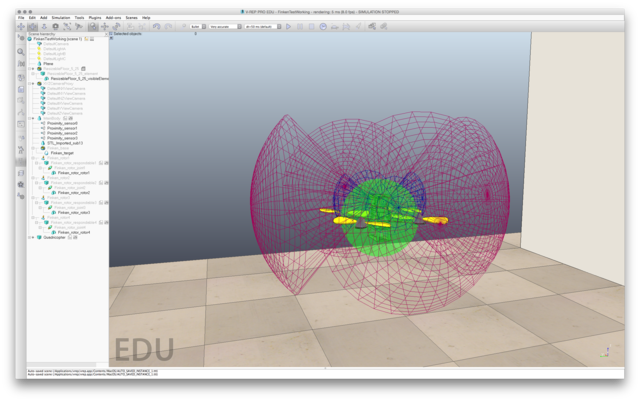